So my recent post about the most expensive items on Amazon was surprisingly popular. Since I tend to write here the same way I did in my LiveJournal, primarily for an audience of friends, I was a bit surprised by the attention (and doubly so since by the time I’d finished writing that post, I figured it to be a bit of a flop, since the expensive things weren’t anywhere near as funny as I’d hoped).

The extra attention seems to have died down now, though, so I figured I’d talk a bit about how things looked from this end. First of all, here’s the eye candy from Webalizer (which I only started using on the 15th, which was serendipitous): 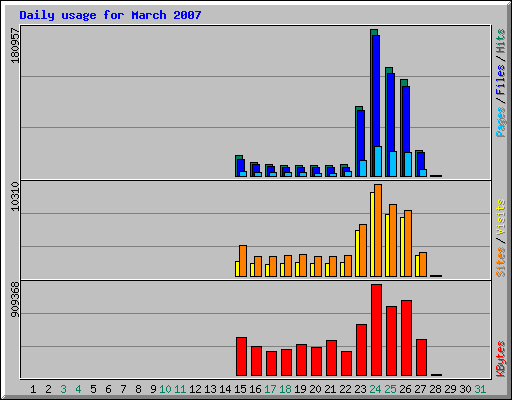 So what happened when? Someone on Reddit linked to one of the Amazon items I listed and mentioned my post’s URL in the Reddit comments. Then around 6 PM last Friday (March 23), the post was linked on The Consumerist. An hour or so later, Cory linked it on BoingBoing, and ten minutes after that it was on Metafilter. Early Saturday morning it was linked from Instapundit. Saturday night, Patrick Lagacé from La Presse linked to it (in French), and then a day after that Dutch linkdump site Geenredactie linked in.

What I find most interesting is which sites brought in the most traffic. Given that list of sites, which would you guess would be the big ones, and which the minor ones? Here’s how things turned out:

Other interesting referrers included lots of Hotmail and Yahoo! Mail, 130 referrals and 5 diggs from Digg, lots of LiveJournal users I’ve never seen before, and plenty of individual blogs, a few of which did pingbacks. A few people linked it on delicious, too. I’m glad OMightyManII appreciated my Bond comment.

One last amusing factoid: When I first posted, I didn’t have Amazon referral links. When BoingBoing linked me, Cory added his referrals; Metafilter automatically added Matt’s, and I think Instapundit’s example links had referral codes in them too. Someone from Gelf Magazine emailed me asking about the referral links specifically for an article, but I think he was hoping that substituting referral links would bother me. No-one bought anything through my referral links.

I’m glad to see that the amount of traffic is dropping back down. I had feared that I was going to be left with a big pile of viewers expecting a typical public aggregating blog, while I wanted to keep things more personal and about me as much as anything else. But it looks like it’ll all be back to normal shortly. I still can’t quite explain what made that post so interesting in the first place, though.

By the way, are any of you Reddit’s afscott or Consumerist’s tipster?