I bought a bike today! I’d been thinking of buying a new bike since last summer, because my road bike (Giant Peloton 8200) and Candice‘s hybrid (Trek 7100) weren’t really so great for riding together — I couldn’t go on gravel paths and found it uncomfortable to keep my speed down, and Look pedals don’t lend themselves to a quick ride for coffee. So I wanted something sort of hybrid-ish too, but not quite as cushy and upright as hers.

I ended up with this, which is pretty much the perfect bike for me: 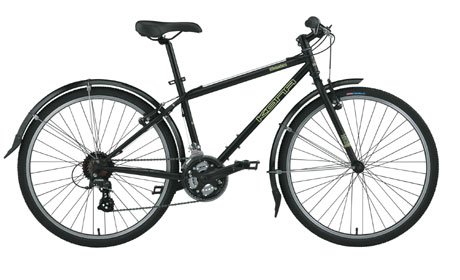 It’s a Kona Smoke, and it’s more of an urban mountain bike than a hybrid — the riding position is a bit more stretched out, it runs on 26″ City Slickers instead of on 700c wheels, and it’s closer to Kona’s classic mountain bike geometry (and speaking of classic, that frame is cromoly, not aluminum).

I ended up having to decide between it and the Trek 7200FX, and both looked like great bikes, but when I took the Smoke out for a test ride, it felt just like my old Kona Fire Mountain that was my commuter bike in Montreal for years until it was stolen out of the front hall of my apartment. The Smoke is like having that bike back (but a bit lighter and with a more modern drivetrain), and I figure I already have my road bike when I want something shiny and aluminum. The Smoke’s narrow tubing and matte black finish look more like a beater bike than a bike-thief magnet.

It also included fenders with mudflaps, glow-in-the-dark decals and a hippo-head horn that looks like a Happy Tree Friends character.

I got it from Cycle Logik on Richmond by MEC, which I’d long ago pegged as a great bike shop, although they seem to cater primarily to roadies (which is fine by me). They replaced the stem to get me a bit more reach and offer free maintenace for the life of the bike, plus they seem pretty active in local cycling and offer winter spinning classes and so on. I figure picking a bike shop is as important as picking a bike, so I’m pretty happy with how this all turned out.

Now I need a lock. It is impossible to find good info about bike locks that are not 10 lb square-link hardened chains ever since the bic-pen Kryptonite problem. I’ll probably get a decent but not $100 u-lock and a cable lock both.