I bought a guitar!

I bought a guitar! 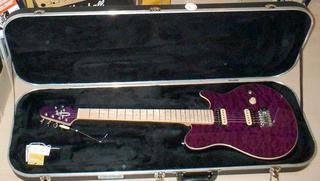 It’s an OLP MM1, which is a
licensed entry-level copy of the Ernie Ball Axis made overseas.


I’m getting it secondhand (but only barely) from a friend who moved on
to a Les Paul Jr. pretty much right away. It’s coming from Texas, so
it’ll probably show up towards the beginning of next week.


While I’ve played bass semi-pro I’ve never got past fooling around with
guitars, and found myself suffering on my poor-condition old Kay
archtop, so this will be a nice new start. I need to pick up a practice
amp, though, and solicit recommendations — I’m leaning toward a
Pignose or a Vox
Pathfinder, but advice is welcomed. I imagine I’ll be playing
mostly blues and alt-rock but poking at other styles.


Yay, new toy! I’ve been thinking of picking up an electric guitar for
years (since I was back in Montreal, at least), so I’m really looking
forward to this.

7 responses to “I bought a guitar!”