I moved desks at work again today, which is the fourth move in two and
a half years. With the exception of one move (after the first round of
layoffs, which was to a very isolated spot) they’ve all been
improvements, though, so I’m not complaining much. This one was to move
me out of the middle of the team I was originally supposed to join
(e-smith folks: network group, by Lori, Stephane and Eugene) and into
the team that I ended up joining (server group, by Steve and Ian and
John), which will mean that we’ll end up communicating a bit better
about what we’re each working on.


The circumstances of today’s move were interesting, though — I was
meant to swap desks with my manager (!) on Friday, and arrived today
to find his cube empty and his stuff piled on a cart. “I figured we’d
just do this this morning, if that’s OK”, he says. Shame about the
upgrade scheduled for this afternoon, I thought. It turned out OK,
though — we’d originally planned to just move my PC, and worry
about the rest tomorrow, but before and after the scheduled bits I
was able to get everything moved.


The reason I’m telling you all about a cubicle is that I have the
best cube there now. It’s laid out somewhat like this: 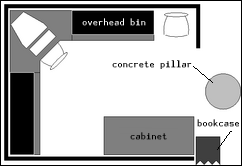 Not only do I get all sorts of surface (grey) and storage (black), but
there’s a BIGASS CONCRETE PILLAR right at the door and a bookcase
right beside that. It leaves about a two and a half foot gap via
which one can enter and exit the cube. Until now, I’ve always been in
cubes with two walls in an L, and now I pretty much have four walls!
On top of that I was able to disable all of the fluorescent lights
directly over it.


Unfortunately this space is on the elevator side of the building, rather
than the window side, but even when I was near the window in my last
desk I couldn’t look out of it. I might grab another convex desk mirror
and mount it on the top of the cube to make sure I still have day/night
cues.


I need a velvet rope or some police tape to put across the opening when
I’m heads-down.