In this Lj_biz car crash discussion,

I decided to do a better chart as a quick project to learn gnuplot
a bit better, and ended up charting account creation rate and userbase
for what I believe are the five largest LiveJournal-based journal
sites: LiveJournal, DeadJournal, GreatestJournal, Blurty, and uJournal. 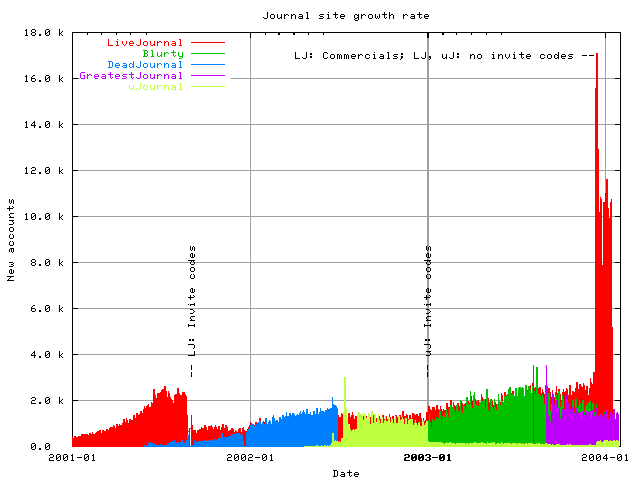 So invite codes definitely have an effect — you can see the
dramatic changes when LiveJournal introduced and removed invite codes,
and smaller but still striking changes on uJournal. (I’m not sure what
caused the drop in DeadJournal account creation halfway through
2002; I remember a dataloss issue there around then, but that shouldn’t
affect new users. Does anyone know when DeadJournal introduced invite
codes?)

One thing to keep in mind when reading the above chart is that
LiveJournal’s decision to abandon invite codes coincided exactly
(and intentionally) with the first screenings of the LiveJournal
commercials.
Some of the peak was obviously the result of moviegoers seeing those
commercials, but the level has stayed pretty high since then.

I decided that one huge inline chart was enough, but you can also
see the chart of total users per
site in the same time period (based on the number of new accounts,
which is the only archival data available). You can also see the
gnuplot
program which created the charts.

All of the data was obtained from the “newbyday” entries of the
sites’ raw
statistics. You may also enjoy reading the equivalent
human-readable
statistics.